Kidney stones are quite prevalent in the United States according to the National Institute of Diabetes and Digestive Kidney Diseases (NIDDK). They estimate that 11 percent of the male population and 6 percent of female population in the US have experienced this condition. 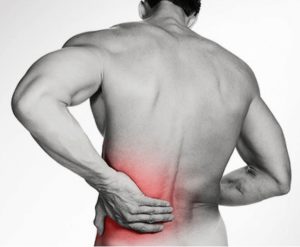 However, many cases of kidney stones go undiagnosed because some people don’t experience any symptoms. Small kidney stones often pass through the urinary system without causing any pain. Only when a stone becomes large enough to block the passage of urine in the ureter or kidney will it cause symptoms.

The first and most noticeable symptom you’ll experience if you have kidney stones is pain in your flanks or near the lower back. This pain is caused by one or more kidney stones blocking the passageway from the kidney down to the bladder.

You will also feel a significant amount of pain if the stone becomes stuck in the kidney preventing urine from flowing down to the bladder. The build-up of urine in the kidney will be painful, to the extent that you may not even be able to stand from a sitting position.

The pain usually comes in waves. Though it can be excruciating at times, it may also subside for a few minutes before returning.

The other symptoms of kidney stones can include:

Can kidney stones be detected before any symptoms appear?

Kidney stones are often detected in people who do not display any symptoms when they undergo a routine medical checkup that includes an x-ray of the area. As the kidney stones have not caused any pain or symptoms, it is highly likely that they can be removed from the body by simply drinking plenty of water to increase urine output.

Unfortunately, there is no standard screening option to help you find out if you have developed kidney stones. A research team at the National University of Singapore claims to have developed such a method though the procedure is still undergoing further studies.

If you believe you’re at risk of developing kidney stones, it would be best to take preventive measures, such as practicing a healthy diet rich in fruits and vegetables, minimizing or eliminating processed foods from the diet, reducing weight if you’re obese, and drinking plenty of water to help the kidneys flush out any stones that may have already formed.